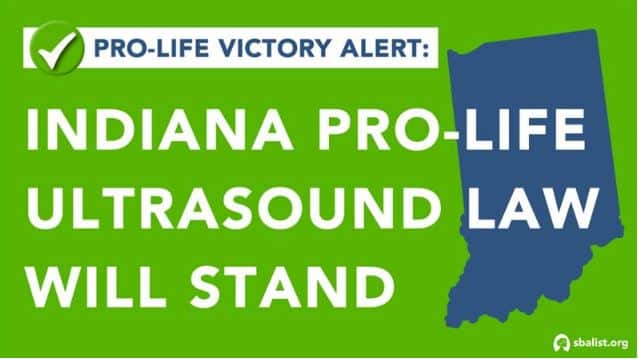 “We are thrilled to hear that Indiana’s compassionate, reasonable ultrasound law will stand. The law simply allows for a mother to see her unborn baby growing in the womb at the time she receives additional informed consent materials – well before the abortion. This precious moment reinforces the humanity of the unborn child, and often moves mothers to choose life. The fact that abortion giant Planned Parenthood fought this law in the first place shows that they are truly pro-abortion, rather than interested in helping expectant mothers make an informed choice. We are grateful this law will take effect and will save Hoosier lives.”

Background on the case: Federal and District Courts earlier this year upheld a preliminary injunction against the Indiana Ultrasound Law. In July of this year, the Supreme Court sent that decision back to the lower courts for further review in light of their recent decision in JMS v. Russo. Planned Parenthood then conceded in the lawsuit. Indiana’s ultrasound law will go into effect in January of next year.