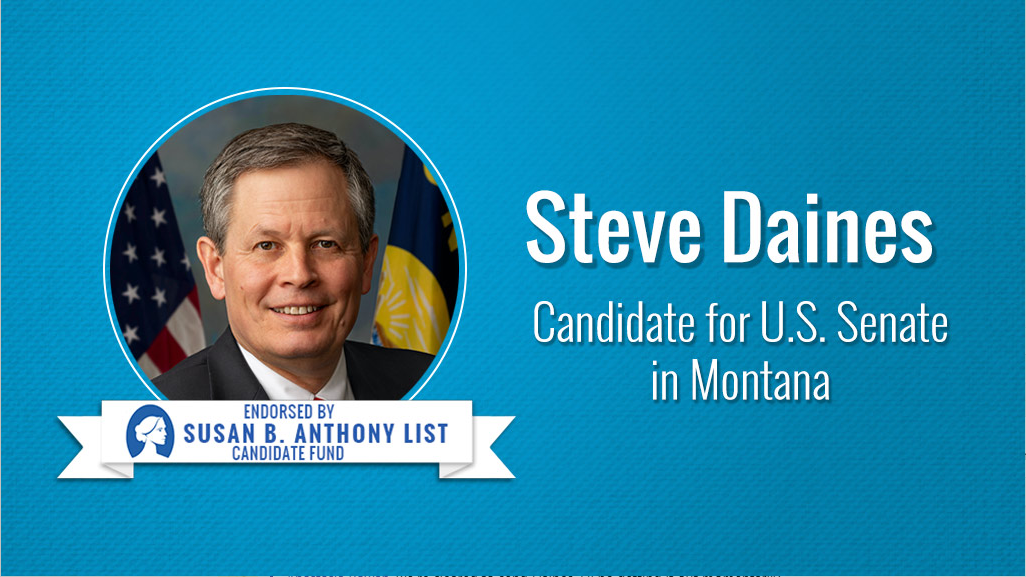 Earlier this month Women Speak Out PAC, the partner super PAC of SBA List, announced plans to support Sen. Daines in his re-election campaign against Democratic Governor Steve Bullock. The comprehensive effort was reported to include boots on the ground, voter contact mail, phone calls, and digital ads, and is part of the organizations’ overall $52 million budget for the 2020 cycle.

“Senator Steve Daines is a tremendous champion of unborn children and their mothers in the U.S. Senate and we are proud to endorse his re-election,” said SBA List President Marjorie Dannenfelser. “The founder of the Senate Pro-life Caucus, Senator Daines has led the charge to end late-term abortion and infanticide, stop taxpayer funding of abortion, and strengthen conscience protections. He has fought tirelessly to confirm President Trump’s outstanding judicial nominees, including Neil Gorsuch and Brett Kavanaugh, and to stop Democrats’ attacks on the Trump administration’s pro-life policies.

“There could not be a greater contrast between Daines and his opponent Governor Steve Bullock, who vetoed popular legislation to protect babies born alive after failed abortions. The SBA List Candidate Fund PAC encourages all pro-life voters in Montana to support the re-election of Senator Daines, to defeat extremists like Bullock, and to protect our pro-life Senate majority.”

Steve Daines has served Montana in Congress for seven years, first elected to the House of Representatives in 2012 and then to the Senate in 2014. He is a co-sponsor of the Born-Alive Abortion Survivors Protection Act, the Pain-Capable Unborn Child Protection Act, and the No Taxpayer Funding for Abortion and Abortion Insurance Full Disclosure Act. In January 2019 he founded the first-ever Senate Pro-life Caucus.

So far this election cycle, the SBA List ground team has already visited more than 800,000 homes and made more than one million live calls to residents of battleground states.