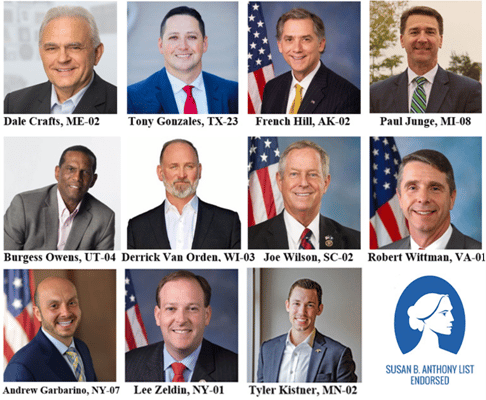 Washington, D.C. –  Today Susan B. Anthony List’s Candidate Fund PAC announced its final slate of endorsed pro-life candidates for the U.S. House of Representatives in 2020. With the announcement of the slate, SBA List Candidate Fund has endorsed 107 federal candidates and 15 state-level candidates in the 2020 cycle.

“At a pivotal moment when Pelosi Democrats’ radical agenda of taxpayer-funded abortion on demand through birth has been held in check only by the vigilance of our pro-life allies, we need champions in Washington more than ever,” said Marilyn Musgrave, SBA List’s vice president of government affairs. “Our final endorsements of the 2020 cycle include devoted fathers, community leaders and mentors; veterans who have defended American values and freedom without counting the cost; and seasoned elected representatives as well as fresh voices. Each one understands the urgent necessity of protecting the most innocent and vulnerable among us – unborn children and their mothers. We are proud to endorse these strong pro-life leaders and dedicated public servants for Congress.”

Dale Crafts (ME-02): At just 24 years old, Dale was in a tragic motorcycle accident that left him paralyzed from the waist down. Dale affirms the American dream that anyone can overcome adversity through hard work and faith and has built a full life for his family of six children and 14 grandchildren. He understands firsthand the precious gift of human life and will fight to honor that gift in Congress.

Andrew Garbarino (NY-02): Andrew is a devout Catholic who will bring his pro-life convictions to Congress. Andrew has persistently advocated for the unborn in the New York State Assembly, including as a member of the Health Committee, exposing the suffering abortion inflicts on women and families. In contrast, his opponent has the financial backing of the radical abortion lobby. Assemblyman Garbarino will be a strong, independent voice for all Long Islanders, born and unborn.

Tony Gonzales (TX-23): As a pro-life father of six, Tony Gonzales is a passionate advocate for the vulnerable. An accomplished Naval cryptologist, he has fought for the American dream for his entire career and will continue the fight to protect our unalienable rights in Congress. While his pro-abortion opponent Gina Ortiz Jones promises to stand with Nancy Pelosi and the radical abortion lobby, Tony will stand up for the values of southwest Texas.

Paul Junge (MI-08): Junge is a former news anchor and attorney from the Lansing area. He is challenging Congresswoman Elissa Slotkin, an extremist who failed her constituents by refusing to protect babies born alive during abortions. Paul Junge knows that every life deserves protection and will bring that principle to Washington as he defends the most innocent.

Tyler Kistner (MN-02): Tyler has spent the past nine years defending American lives as a U.S. Marine. Now he is fighting to take back Minnesota’s 2nd Congressional District from pro-abortion Congresswoman Angie Craig, who votes in lockstep with Pelosi’s agenda of taxpayer-funded abortion on demand through birth. As the father of a 3-year-old daughter and a newborn son, Tyler will be strong advocate in Congress for pro-life Minnesotans.

Burgess Owens (UT-04): A former NFL star, Burgess Owens has spent his post-NFL career serving his community through the nonprofit he founded for troubled and incarcerated youth, Second Chance 4 Youth. Now he is focusing his sights on Congress, where he will remain faithful to Utah’s pro-life, pro-family values and work to protect the unborn every chance he gets.

Derrick Van Orden (WI-03): Derrick is a man of deep faith and courage who served our nation valiantly in the U.S. Navy for 26 years, 21 of those years as a Navy Seal. Having put his own life on the line every day for his fellow Americans, Derrick understands the precious value of every human life – especially the unborn. Unlike pro-abortion incumbent Ron Kind, who is radically out of step with Wisconsinites, Derrick will work to protect the defenseless.

Rep. French Hill (AR-02): With an “A” rating on our National Pro-life Scorecard, French Hill is a leader in the effort to end late-term abortion. He consistently votes to stop taxpayer funding of abortion and protect the conscience rights of pro-life Americans. The people of Arkansas are strongly pro-life and Congressman Hill gives voice to their values in Washington.

Rep. Joe Wilson (SC-02): Congressman Wilson doesn’t hesitate to lead on the life issue, a record reflected in his “A” rating on our National Pro-Life Scorecard. Pro-life voters of the Palmetto State can count on Congressman Wilson to protect the unborn and fight for hardworking taxpayers who don’t want their tax dollars funding the big abortion industry.

Rep. Rob Wittman (VA-01): Congressman Wittman has consistently voted to protect the unborn, especially from painful late-term abortions. His strong record is a welcome contrast to Democrats’ extreme support for abortion on demand through birth and even infanticide, both in Virginia and in Congress, and has earned him an “A” rating on our National Pro-Life Scorecard.

Rep. Lee Zeldin (NY-01): Radical pro-abortion groups are funneling money into New York’s 1st Congressional District to try to take down Congressman Lee Zeldin, a steadfast defender of the vulnerable who has earned an “A” rating on our National Pro-Life Scorecard. But Congressman Zeldin represents New Yorkers, not the abortion lobby, and won’t waver in his support for common sense pro-life policies.