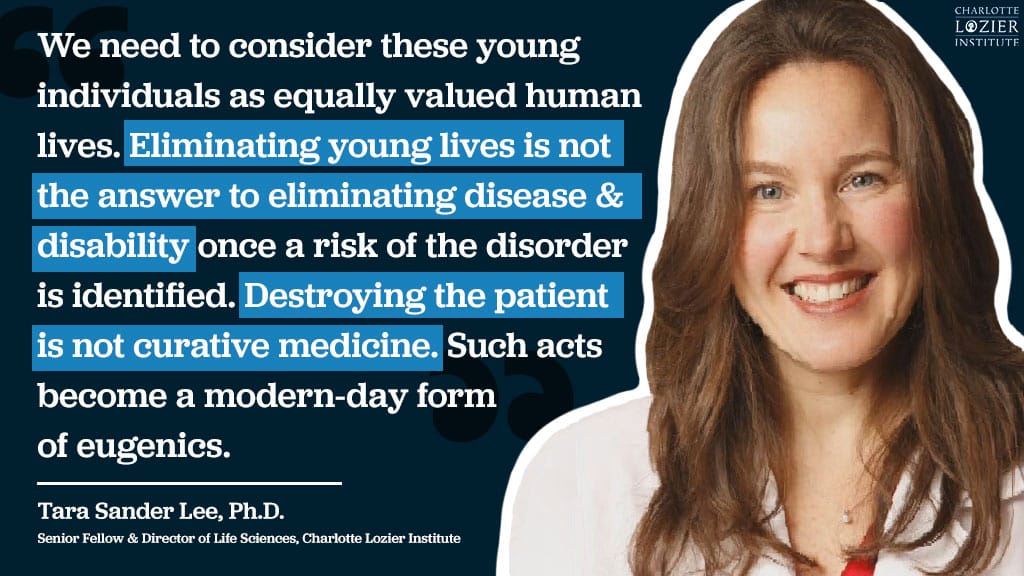 Washington, D.C. – Today, expert witnesses representing the national pro-life group Susan B. Anthony List (SBA List) and its research arm, Charlotte Lozier Institute (CLI) will testify in favor of South Dakota HB 1110A, legislation to protect unborn children from abortion due to a prenatal diagnosis of Down syndrome. The bill was called for by Governor Kristi Noem in her State of the State address in January.

Those testifying include SBA List State Policy Director Sue Liebel and Tara Sander Lee, Ph.D., senior fellow and director of life sciences at CLI. They will be joined by Katie Shaw, a pro-life lobbyist and advocate for anti-discrimination abortion laws. Shaw, who has Down syndrome, was instrumental in the passage of a law banning discrimination abortions in her home state of Indiana which was signed by then-Governor Mike Pence.

“Down syndrome should never be a death sentence, especially in a society like ours that prides itself on diversity and inclusiveness,” said SBA List State Policy Director Sue Liebel. “While tremendous advances have been made toward full acceptance of individuals with Down syndrome, shamefully, they are on the verge of being eliminated in some parts of the world. Here in the United States, as many as 67% of unborn babies diagnosed with Down syndrome are aborted. It is time our laws caught up with basic compassion and overwhelming public opinion. We are proud of Governor Noem and South Dakota lawmakers who are leading the charge to end lethal discrimination, and we hope to see more states follow their example.”

In her testimony, Sander Lee writes:

“We need to consider these young individuals as equally valued human lives. Eliminating young lives is not the answer to eliminating disease and disability once a risk of the disorder is identified.  Destroying the patient is not curative medicine. Such acts become a modern-day form of eugenics. HB 1110 would provide necessary, distinct protections for developing human beings at risk for Down syndrome, preventing discrimination based on genetics or disability.”

A Marist/Knights of Columbus poll last month found that 70% of Americans – including 56% of those who identify as pro-choice, 59% of Democrats, and 70% of Independents – oppose abortion based on the expectation that an unborn child may have Down syndrome.

In May of 2019, the Supreme Court declined to hear a case concerning Indiana’s anti-discrimination abortion law. In his concurring opinion, Justice Clarence Thomas wrote that whether the government has a right to prohibit abortions based on fetal anomalies remains “an issue of first impression” and “remains an open question.”

Charlotte Lozier Institute was launched in 2011 as the education and research arm of Susan B. Anthony List. CLI is a hub for research and public policy analysis on some of the most pressing issues facing the United States and nations around the world. The Institute is named for a feminist physician known for her commitment to the sanctity of human life and equal career and educational opportunities for women.  The 175th anniversary of Dr. Charlotte Denman Lozier’s birth occurred on March 16, 2019.