With Deadline Looming, Eight Carriers in Five States Still Provide No Information About Whether Their Obamacare Plans Cover Abortion 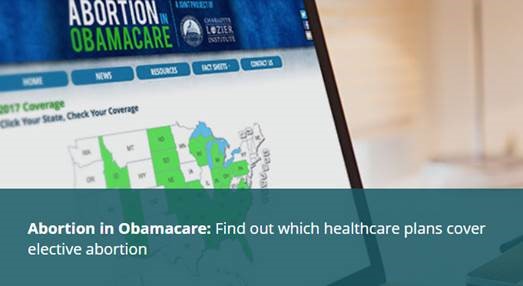 The letters ask HHS to review the carriers and take steps to bring them into compliance, ensure that current enrollees of these plans are informed when updates are made, and provide an extended enrollment deadline to consumers in the affected states.

Since open enrollment began on November 1, CLI and Family Research Council (FRC) research staff have been performing an ongoing examination of healthcare.gov and state-based exchanges, looking for information on abortion coverage and the accessibility of that information.

The lack of transparency on abortion coverage affects at least 151 exchange plans in five states. The noncompliant carriers are:

Since October of 2013, CLI has reported on the lack of transparency and generally confusing nature of the exchange plans. In 2014, after the non-partisan Government Accountability Office (GAO) released a report identifying 1,036 taxpayer-subsidized Obamacare plans that covered elective abortion, CLI and FRC launched Obamacareabortion.com to inform consumers about which Obamacare plans include elective abortion coverage. The groups’ 2018 fact sheet with detailed information and an interactive map are available online at Obamacareabortion.com.

“Abortion is not health care – it is the deliberate destruction of innocent human life, to which millions of Americans deeply object. Consumers deserve to know which health plans include abortion coverage before they decide on plans for themselves or their families. Shamefully, some insurance companies have made this information impossible to find or forced prospective applicants to hunt for it in an unnecessarily opaque and confusing system. That’s why we established Obamacareabortion.com and thoroughly update it each year: to serve consumers looking for plans they can purchase in good conscience, and to continually remind the public and policymakers that Obamacare forces taxpayers to fund elective abortion, something most Americans oppose.”

Susan B. Anthony List and its partner super PAC, Women Speak Out spent more than $18 million in the 2016 election cycle, knocking on more than 1.1 million doors in battleground states to defeat Hillary Clinton and maintain a pro-life Senate. SBA List is dedicated to pursuing policies and electing candidates who will reduce and ultimately end abortion. To that end, the SBA List emphasizes the education, promotion, mobilization, and election of pro-life women.  The SBA List is a network of more than 600,000 pro-life Americans nationwide.

Charlotte Lozier Institute was launched in 2011 as the education and research arm of Susan B. Anthony List. CLI is a hub for research and public policy analysis on some of the most pressing issues facing the United States and nations around the world. The Institute is named for a feminist physician known for her commitment to the sanctity of human life and equal career and educational opportunities for women.