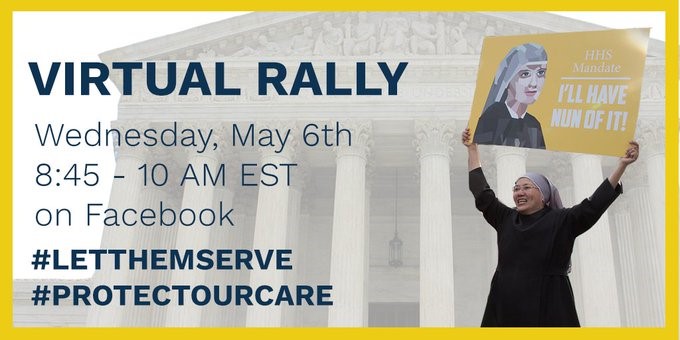 Washington, D.C.  – Today the Becket Fund is hosting a virtual rally in advance of oral arguments to be heard by the U.S. Supreme Court in which they will consider the case of the Little Sisters of the Poor against the Obama-era HHS abortifacient drug mandate. The mandate would force the sisters to provide abortion-inducing drugs in their healthcare plans.

“The government simply does not need Catholic nuns to provide dangerous abortion drugs to women. The Sisters want nothing more than to carry out their mission of love and humble service to the elderly poor. We hope the Supreme Court will uphold the fundamental rights of these beautiful women and let them serve.”

“It’s hard to believe that for seven years, the Little Sisters have been fighting this unjust HHS mandate and now must return to the Court to resist two states who want that mandate enforced nationwide. No one should ever have to unwillingly participate in the destruction of innocent human life. This rule violates their consciences and deeply held beliefs, and this near-decade-long ordeal has diverted time and resources from the Little Sisters’ loving mission to the frail elderly and poor. Our prayers go with them as they return to the Supreme Court, and we are proud to support them from our homes across the country.”

The Supreme Court has twice ruled in favor of the Little Sisters of the Poor. In 2018 the Trump administration finalized new regulations that protect both religious and moral objectors from the burdensome Obama-era HHS abortifacient drug mandate. However, the Little Sisters remain threatened by a lawsuit by Pennsylvania Attorney General Josh Shapiro and New Jersey Attorney General Gurbir S. Grewal and a recent 3rd Circuit ruling against the Sisters. The case is Little Sisters of the Poor v. Commonwealth of Pennsylvania Et Al.