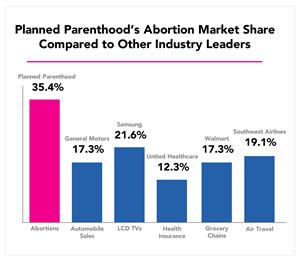 Washington, D.C.  – A new paper by Charlotte Lozier Institute (CLI) President Chuck Donovan and Dr. James Studnicki, CLI’s Vice President and Director of Data Analytics, finds that Planned Parenthood relies heavily on an abortion-centered business model and is not a significant provider of medical care in the United States.

Planned Parenthood: “Irreplaceable” and “Life-Saving”? investigates two common claims made by and about Planned Parenthood. The authors conclude that Planned Parenthood is not only highly replaceable, providing a minuscule percentage of the national total for most of their non-abortion services, but that they could do more to save lives by ending their provision of abortion than by any other service they offer.

“With the exception of abortion, Planned Parenthood does not provide any service that is not easily available from alternative providers,” write Donovan and Studnicki.

The report compares Planned Parenthood’s share of the U.S. abortion market to the market share of well-known leaders in other industries. For example:

The report also notes that Planned Parenthood provides less than 1.4 percent of the nation’s HIV tests and less than 1 percent of pap tests, and that in the last five years service-to-client ratios for breast exams and pap tests have declined by 37 percent.

View this report’s key findings as an infographic here.

“Planned Parenthood promotes itself as an indispensable health care provider and community asset, while downplaying its role as the nation’s largest abortion vendor,” said Studnicki. “This fiction is essential to justifying the half billion dollars in annual taxpayer funding they receive, but their own data paint an entirely different picture.”

Donovan added, “Planned Parenthood’s commitment to abortion on-demand is clearly more than ideological. Their market domination would make such giants in their respective industries as General Motors and Samsung envious – but cornering the abortion market is nothing to celebrate. The truth is rapidly catching up with Planned Parenthood and with it the hope that policymakers will act to redirect funding to community health centers that provide comprehensive care without doing violence to expectant mothers or their children. That would be a truly lifesaving step.”

Charlotte Lozier Institute was launched in 2011 as the education and research arm of Susan B. Anthony List. CLI is a hub for research and public policy analysis on some of the most pressing issues facing the United States and nations around the world. The Institute is named for a feminist physician known for her commitment to the sanctity of human life and equal career and educational opportunities for women.