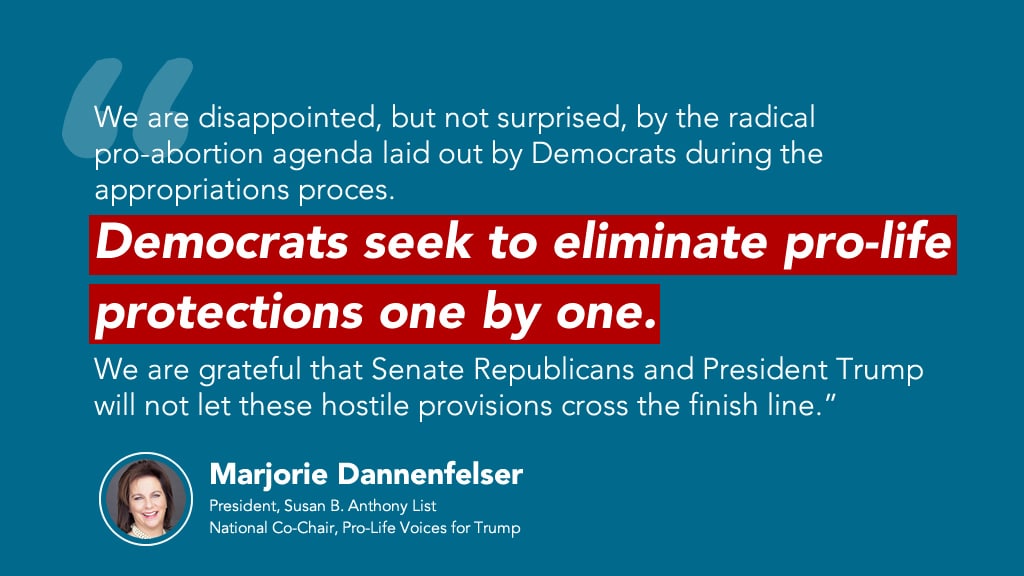 “We are disappointed, but not surprised, by the radical pro-abortion agenda laid out by Democrats during the appropriations process,” said SBA List President Marjorie Dannenfelser. “Democrats seek to eliminate pro-life protections one by one, including the long-standing Hyde Amendment which has saved more than 2.4 million lives by stopping taxpayer funding of abortion on demand. Look no further than this statement for proof of their agenda. We are grateful that Senate Republicans and President Trump will not let these hostile provisions cross the finish line.

“This is just a hint at what would happen under a Joe Biden presidency, when pro-abortion radicals would seek to open the floodgates of abortion on-demand, without limits, paid for by taxpayers. We stand alongside President Trump, the most pro-life president in our nation’s history. Ahead of Election Day, SBA List and our partners are committed to holding abortion extremists accountable at the ballot box.”

In response to Democrats’ reckless attempts to erase pro-life protections during recent legislative markups, House Republicans have offered amendments to restore pro-life policies such as the Protect Life Rule and Global Protect Life Rule. They also attempted to reinstitute the longstanding Dornan Amendment, which bans taxpayer funded abortion in the District of Columbia. House Democrats rejected all of these measures.

In 2019, congressional leaders reached a Bipartisan Budget Agreement which stipulates: “There will be no poison pills, additional new riders…unless agreed to on a bipartisan basis by the four leaders with the approval of the President.” The agreement remains in effect through the 2021 fiscal year. Unfortunately, House Democrats have not reflected that agreement in their 2021 proposed bills.

President Trump has promised to veto “any legislation that weakens pro-life federal policies and laws, or that encourages the destruction of human life at any stage.”

Last year, SBA List and other pro-life groups rallied to defeat the Shaheen Amendment, a highly controversial, partisan attack on pro-life foreign policy, as well as other attacks on pro-life protections in spending bills. The Trump administration has made extraordinary gains to protect unborn children both at home and overseas, as well as the consciences of taxpayers, by implementing pro-life policies such as the Protect Life Rule and Protecting Life in Global Health Assistance (PLGHA), the modernized Mexico City Policy.

SBA List has already visited over one million voters and made more than 1.5 million live calls to voters in battleground states to educate them about the life or death stakes of this election. Learn more at www.LifeOnTheBallot.com.