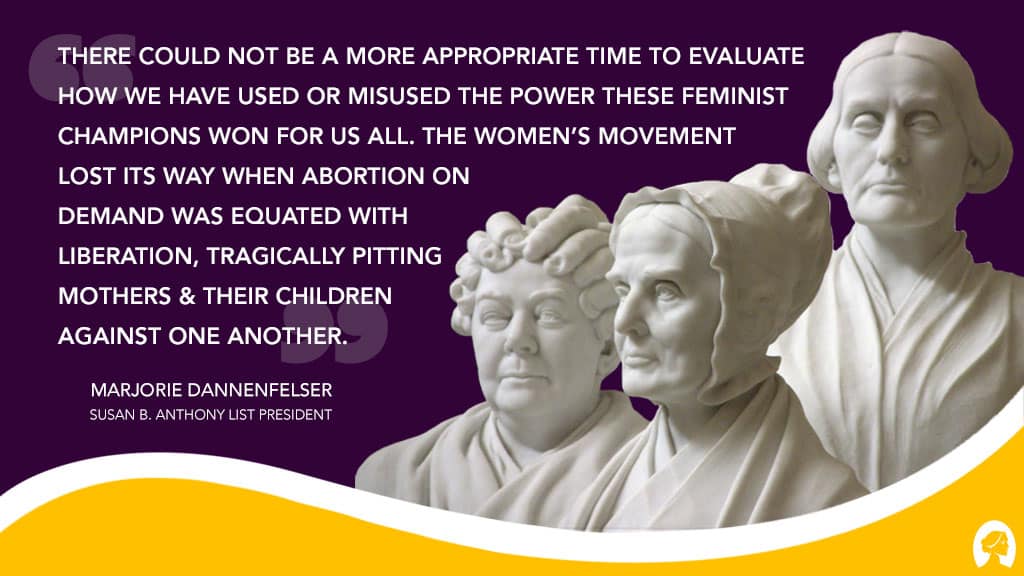 100 Years After Women Gained the Right to Vote, the Pro-Life Movement Carries On the Fight for Human Rights

Spearheaded by activist leaders such as Elizabeth Cady Stanton and Lucretia Mott, the Convention formally launched the women’s suffrage movement in America. Attendees debated and ultimately adopted a Declaration of Sentiments – modeled after the Declaration of Independence – and 11 resolutions calling for social and political equality for women, including voting rights.

In 2019-20, Americans commemorate the 100th anniversary of the 19th Amendment to the U.S. Constitution (known as the Susan B Anthony Amendment) recognizing women’s right to vote. Susan B. Anthony’s 200th birthday was celebrated on February 15, 2020.

“As we celebrate the achievements and contemplate the legacy of the brave women and men who fought to enfranchise all Americans, we reaffirm that the pioneers of women’s rights were unanimously and adamantly against abortion,” said SBA List President Marjorie Dannenfelser, who serves as national co-chair of Pro-Life Voices for Trump. “Susan B. Anthony, Elizabeth Cady Stanton, Alice Paul, and their compatriots understood that the rights of women extend to their children – born and unborn.

“There could not be a more appropriate time to evaluate how we have used or misused the power these feminist champions won for us all. The women’s movement lost its way when abortion on demand was equated with liberation, tragically pitting mothers and their children against one another. Forty-seven years after Roe v. Wade imposed abortion on demand through birth nationwide, we mourn the destruction of more than 60 million girls and boys intended for this world and the wounding of their mothers. This is not how any authentic human rights movement works; genuine rights cannot be built on the broken bodies and rights of fellow human beings.

“But there is hope. In 2020, abortion-centered feminism is in terminal decline, while the optimism, youthful energy, and momentum of the pro-life movement in America are growing day by day. Under President Trump – the most pro-life president in history – and his administration, life is winning. In contrast, the abortion extremism of the Democratic Party and its standard-bearer Joe Biden is deeply unpopular and unsustainable.

“Heading into the most crucial election of our lifetimes for the pro-life cause, SBA List’s grassroots army is working harder than ever to reach 4.6 million voters – as many as the last three election cycles combined – to defeat abortion extremists at the ballot box and promote authentically pro-woman, pro-life leadership. We must rededicate ourselves to the work our activist sisters and friends began that remains unfinished and engage without tiring until the right to life, the foundation of every other right, is finally restored in America.”