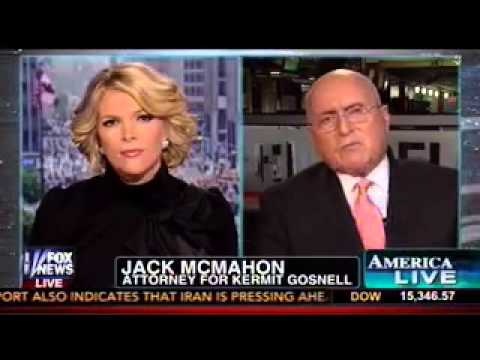 “… I’ll tell you what: I’ve come out of this case realizing that 24 weeks is a bad determiner. It should be like 16-17 weeks. That would be a far better thing, because the babies would not even be arguably viable at that point in time, and I think the law should be changed to that.”
Gosnell Attorney: “Law Should be Changed” Ban Abortion after 16 Weeks
Jack McMahon, to Megyn Kelly, FOX News, 5/22/13

“I’m not going to comment too much on this except to say it seems… important and unexpected. Kermit Gosnell’s attorney, Jack McMahon, spends 8:30 minutes defending Gosnell, proving himself to be one of the few still willing to align themselves publicly with the former abortion doctor, convicted of three counts of first-degree murder of infants this month. Having spent so much time with a late-term abortion doctor and defending him even post-conviction, one assumes McMahon is among the most understanding and lenient toward the pro-choice position of just about anyone in the country…And yet, in his last 30 seconds, McMahon asserts that he now believes a 16-week cut-off for legal abortions would be preferable to Pennsylvania’s 24-week limit.”
Gosnell attorney: Maybe a 16-week deadline for abortion and more regulation would be better
Mary Katharine Ham, HotAir, 5/22/13

“The Gosnell trial should be a turning point in the abortion wars. Pro-life members of Congress should introduce legislation restricting abortion in the final trimester in all states. Abortion should again be an issue in next year’s campaign for House and Senate seats. Tightly argued court cases should be brought before the courts so that the Supreme Court can begin to right the wrong of Roe v. Wade, a decision that even liberal Justice Ruth Bader Ginsburg now acknowledges could have benefited from some ‘judicial restraint.’ …The time has come. More babies and women can and must be saved.”
Kermit Gosnell’s ‘clinic of horrors’
Cal Thomas, The Washington Examiner, 5/15/13

“Medical science and skilled doctors keep pushing back the time babies can survive birth before they’ve reached full term. Rest assured that any doctor in the U.S. who performs abortions past 20 weeks is looking at the Gosnell verdict and wishing there was more clarity about what falls along the spectrum between a day at the office and first-degree murder.”
America’s Second Civil War
Daniel Henninger, Wall Street Journal, 5/15/13

“…shouldn’t pro-life groups advocate a ban at the state level on late-term abortions? This, we will be told, is unconstitutional. Perhaps. About a dozen states already ban third-trimester abortions. The Supreme Court is considering a case involving Nebraska’s ban on abortions past the 20-week mark. Maybe in light of extraordinary advances in science and prenatal medicine, the court would recognize that there is little difference between some of Gosnell’s victims allegedly killed in utero and those allegedly killed after birth.”
Who will introduce the Gosnell amendment?
Jennifer Rubin, The Washington Post, 5/1/13

“What we need to learn from the Gosnell case is that late-term abortion is infanticide. Legal infanticide. That so many people in the media seem untroubled by the idea that 12 inches in one direction is a “private medical decision” and 12 inches in the other direction causes people to react in horror, should be troubling… I cannot legitimately say I am a person who cherishes human rights—the animating issue of my life and a frequent topic of my writing—and remain silent about our country’s legally endorsing infanticide.”
Abortion Rights Community Has Become the NRA of the Left
Kirsten Powers, The Daily Beast, 5/6/13

“We can’t know whether Kennedy and the Court would uphold a late-term abortion ban. But that should not deter Congress from passing such a nationwide ban, so as to rein in an abortion regime that is tantamount to infanticide on demand…. So drawing a line at, say, 18 weeks after conception would likely pass muster with the Supreme Court and with the vast majority of Americans. It would be also be a line that could move up as medical science advances.”
Against Infanticide
John McCormack, The Weekly Standard, 5/13/13

“What’s the difference between how Gosnell aborted these babies and how legal abortionists abort babies after 20 weeks of pregnancy, I asked. ‘I think it’s important to recognize that this particular procedure is nowhere in the medical literature,” explained Tracy Weitz, an associate professor at the University of California, San Francisco… ‘When a procedure that usually involves the collapsing of the skull is done, it’s usually done when the fetus is still in the uterus, not when the fetus has been delivered.’”
Kermit Gosnell and the abortion movement’s dark past
Timothy P.Carney, The Washington Examiner, 4/17/13

“We can no longer pretend the fetus is invisible. We can no longer seek to banish the state from our lives, but rather need to engage its power to improve women’s lives. We must end the fiction that an abortion at 26 weeks is no different from one at six weeks…These are not compromises or mere strategic concessions, they are a necessary evolution. The positions we have taken up to now are inadequate for the questions of the 21st century. We know more than we knew in 1973, and our positions should reflect that.”
Abortion rights are under attack, and pro-choice advocates are caught in a time warp
Frances Kissling, The Washington Post, 2/18/11

“…how is it mainstream to kill children who feel pain and could survive outside the womb? Is there no middle ground in this debate, or is a woman’s right to choose so sacred that a baby is only human if its mother and doctor decide for her? Right now that is the case in Maryland, where abortion is virtually available on demand throughout a pregnancy. In a state where the governor just signed a law ending the death penalty, based in part on an appeal to the dignity of human life, isn’t it worth discussing the difference between infanticide and abortion?”
After Gosnell, Maryland should reconsider late-term abortion
Marta Mossburg, The Baltimore Sun, 5/7/13

“As an abstract matter, birth is as arbitrary a point as any to draw the line between abortion and homicide. If a woman has a ‘right to choose’ to hire a doctor to kill her baby in utero or partway down the birth canal, why should she lose that right simply because he’s slow in getting the job done? Or, to put the shoe on the other foot, if infanticide is murder, how can an abortion of a child at the same stage of development be acceptable?”
From Roe to Gosnell
James Taranto, The Wall Street Journal, 4/15/13

“’I have mixed feelings about abortion being legal during the very beginning stages, like first seven weeks, but definitely I am against abortion being used as birth control in mid- to late stages. That is obviously murder — very much so. An eagle egg in our country is treated with more respect.’… I had a founder of Planned Parenthood Bucks County call and tell me the same thing. The Gosnell case causes people to rethink their position.”
On Gosnell, guns and angry grannies
Anonymous Planned Parenthood official, as reported by J.D. Mullane, Bucks County Courier Times, 5/16/13

“Though I do not support a “personhood” amendment, neither am I okay with the Orwellian dodge that it’s not a baby unless and until we say it’s a baby. And I continue to hope that someday, Americans will look back on the twin moral blind spots of infanticide and capital punishment – yes, even for terrorists – and wonder what we were thinking.”
Are there more abortion doctors like Kermit Gosnell? And do we want to know?
Melinda Henneberger, The Washington Post, 4/28/13

“Years ago, a friend of mine worked in a hospital where in one ward women were terminating second-trimester pregnancies and in an adjoining ward women were trying to save their second-trimester pregnancies. A nurse who worked in both wards told her that viability was changing every three or four years. The lines are getting blurrier and blurrier…But it’s important to contemplate, too, that there will come a day when a very young fetus can be transferred from the mother’s body into another woman or an incubator and brought to term. There will come a day when a fetus of 15 weeks can be saved. What will these issues do to our laws?”
Gosnell case blurs lines on abortion
Sally Quinn, The Orange County Register, 4/30/13