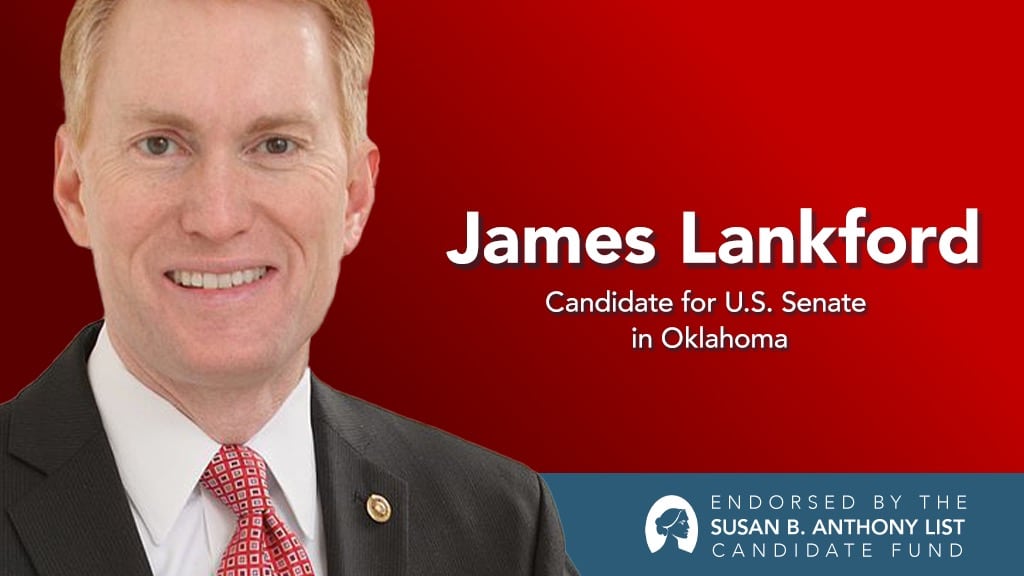 Greenville, S.C. – Today Susan B. Anthony List’s Candidate Fund PAC announced its endorsement of U.S. Senator James Lankford (R-OK) for re-election. The group’s president, Marjorie Dannenfelser, will join the senator for a private event in Oklahoma today. While in the state, Dannenfelser will also attend an event with Governor Kevin Stitt (R) to celebrate his signing of eight pro-life bills passed by the Oklahoma Legislature this year.

“We are proud to endorse our friend and ally Senator James Lankford for re-election. He has proven his courage and dedication to unborn children and their mothers again and again. Most recently he has spearheaded the ongoing fight in the Senate to preserve the Hyde Amendment, longstanding policy that has saved nearly 2.5 million lives by keeping taxpayers out of the abortion business, from attack by pro-abortion Democrats. He is a leader in the effort to modernize our nation’s radical abortion laws at the Supreme Court, in line with science and overwhelming public consensus. We look forward to his victory so he can continue this vital work, serving the deeply pro-life state of Oklahoma and standing up to abortion extremism in Washington.”

“One of our most basic human principles is to protect the value of every life–no matter how small. I’m honored to work with and be endorsed by Susan B. Anthony List President Marjorie Dannenfelser. SBA List has been an invaluable partner in protecting life at all stages and I’m humbled by their incredible support. United, we will continue to protect life in the womb.”

Senator James Lankford has consistently voted to protect unborn children and their mothers, supporting the Born-Alive Abortion Survivors Protection Act, the Pain-Capable Unborn Child Protection Act, the No Taxpayer Funding for Abortion Act, and many others. As chair of the Senate Values Action Team, he constantly advocates for the unborn and for pro-life Americans. He has criticized HHS Secretary Xavier Becerra for his abortion extremism, and he opposed the so-called Equality Act, which would enshrine abortion on demand in federal law. He also co-signed the recent amicus brief submitted by over 200 Republican members of Congress supporting Mississippi in the Dobbs late abortion case before the U.S. Supreme Court.