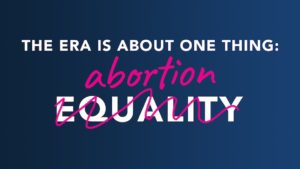 SBA List Blasts Ongoing Push to Enshrine Abortion on Demand up to Birth in the U.S. Constitution

Washington, D.C.  – Pro-abortion House Democrats backed by President Biden introduced a resolution today advocating the immediate insertion of the Equal Rights Amendment into the U.S. Constitution, despite the expiration of the ratification deadline decades ago. As written, the ERA would enshrine in the Constitution a so-called “right” to abortion on demand up to birth, indefinitely blocking state and federal policies that protect unborn children as well as their mothers.

House Democrats voted last year to remove the ERA deadline. SBA List denounced the vote and announced that votes on the legislation would be scored and double-weighted in each member’s profile on the National Pro-life Scorecard.

“Ahead of a ruling in the Dobbs late abortion case this summer and then the pivotal midterm elections, pro-abortion Biden Democrats are desperate to motivate their base. As the nation moves in a more democratic direction on abortion policy and the Supreme Court seems poised to return the issue to the people and their elected representatives, they will stop at nothing to enshrine their radical agenda in the Constitution itself. First they voted to change the long-expired ERA deadline, now they want to ignore it altogether. Democrats’ ongoing push to illegally resurrect the ERA is less about equality and empowerment for women than about expanding a so-called ‘right’ to abortion – the greatest human rights violation of our time – up to the moment of birth, paid for by taxpayers.

“We thank our pro-life allies in Congress for standing united for unborn children and their mothers. The overwhelming majority of Americans want significant limits on abortion and it’s time their will was reflected in our laws.”

In January of 2020, the Justice Department Office of Legal Counsel published a decisive opinion stating that the 1972 ERA has expired and that new efforts to ratify it would be considered null and void. Then in 2021, an Obama-appointed federal district judge concurred that recent attempts to ratify the ERA by Nevada (2017), Illinois (2018), and Virginia (2020) have no legal effect and do not count towards the required three-fourths states needed to ratify the constitutional amendment.

The Supreme Court has said it will address whether all pre-viability abortion limits are unconstitutional in Dobbs v. Jackson Women’s Health Organization. The Court heard oral arguments in the case on December 1, 2021, and a decision is expected by the summer of 2022.