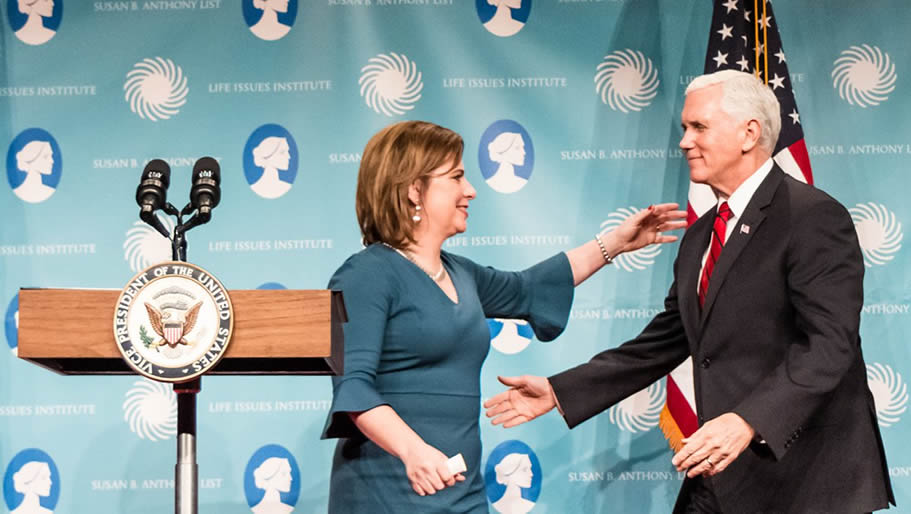 Washington, D.C. – Vice President Mike Pence will give remarks on Tuesday, November 30 at the National Press Club in Washington, D.C. ahead of oral arguments in Dobbs v. Jackson Women’s Health Organization, a U.S. Supreme Court case involving Mississippi’s Gestational Age Act which would limit abortion after 15 weeks. Pence will be joined by Susan B. Anthony List President Marjorie Dannenfelser, who will give an introduction and host a fireside chat following the speech. The event is open to invited press and will begin at 11:30 a.m.

Ahead of oral arguments on December 1, SBA List launched a $2.5 million television and digital ad campaign, part of the group’s overall $10 million campaign to educate Americans about the stakes of the Dobbs case. The Court will address whether all pre-viability abortion limits are unconstitutional.

The event is invitation-only. To request an invitation please contact probertson@sbalist.org. All attendees will be required by the National Press Club to show proof of vaccination.

“The Dobbs late abortion case poses the greatest opportunity in two generations to reconsider the Supreme Court’s radical abortion precedents and return the power to protect unborn children and mothers to the people. Few of us understand the stakes better than Vice President Mike Pence, who has been fighting to restore the right to life in our law for years and served in the most pro-life administration in history,” said SBA List President Marjorie Dannenfelser. “He is right in his unfailing conviction that life is winning in America. Science makes clear that unborn children are human and can feel pain by 15 weeks. Across the nation, state lawmakers acting on the will of their constituents have enacted more than 100 pro-life laws this year. We are grateful for Vice President Pence’s insight, and together we are hopeful that Roe v. Wade will soon be relegated to history. It is time to modernize our laws.”

SBA List and its affiliates will spend $72 million during the 2021-2022 election cycle.