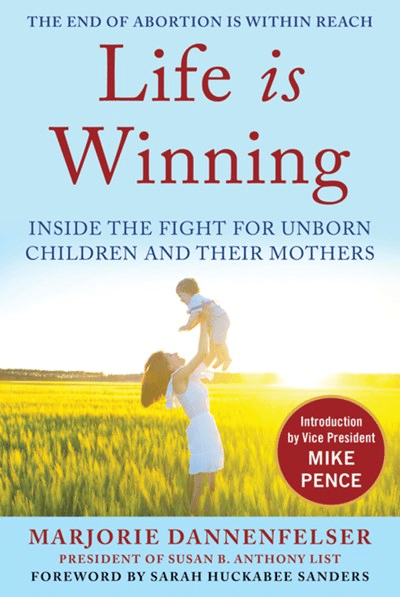 “It has never been more critical for each of us to continue to stand up and speak out…this important book will encourage and inspire.”   –Vice President Mike Pence

Inside the Fight for Unborn Children and Their Mothers

National Co-Chair of the Pro-Life Voices for Trump Coalition

Marjorie Dannenfelser, president of Susan B. Anthony List and leading architect of the pro-life strategy that helped propel then-candidate Donald Trump to his stunning victory in 2016, gives inside perspective on how her own pro-life conversion – and the president’s – resembles the national sea change happening today, and why the end of abortion and restoration of life in America is closer than ever before.

“Life is Winning” gives readers an inside look at:

Ahead of the pivotal 2020 elections, momentum is building across America to revisit the 1973 Roe v. Wade decision that struck down laws protecting unborn children and their mothers nationwide.  As Sarah Huckabee Sanders writes in the foreword, “The test of any civilization is how it treats the least among us, and defending life is what makes America special.”  “Life is Winning” makes the case that the pro-life movement in America has never been stronger, and provides lessons for all conservatives on how to build coalitions that win elections and change national policy.

Marjorie Dannenfelser (Washington, D.C.) Marjorie Dannenfelser is president of Susan B. Anthony List, a national pro-life group with a mission of ending abortion by electing leaders and advocating for laws that save lives. Dannenfelser has been profiled in The New York Times, The New Yorker, and The Washington Post, among others. She was named one of Politico Magazine’s Top 50 Influencers and is counted among The Washington Examiner’s top 10 Political Women on the Move, Newsmax’s top 25 Most Influential Republican Women, and among Newsweek’s top 10 Leaders of the Christian Right.  https://www.sbalist.org/

Praise for “Life is Winning”

“‘Life Is Winning’ proves that we don’t have to compromise our pro-life principles or stay silent about the things that matter most.”

“Whatever your political beliefs, whatever your faith, indeed, if you are an atheist, liberal or conservative, please read this book. It has the power and strength to change and save lives.”

“Those of us in the U.S. Senate who have the privilege of standing with President Trump to fight for innocent life could not ask for better allies than Marjorie and Susan B. Anthony List.”

“‘Life Is Winning’ offers a rich account of the great modern-day civil rights cause that is the pro-life movement…and presents a vision for the future that veterans of the movement and newcomers alike will find compelling.”

Inside the Fight for Unborn Children and Their Mothers