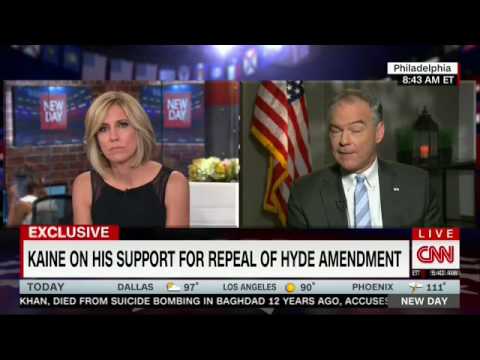 Dannenfelser: “Kaine’s charade on abortion is getting old, and he’s only been on the ticket for a few days.”

“The attempt at deception continues,” said Susan B. Anthony List President Marjorie Dannenfelser. “Hillary Clinton’s plan to repeal Hyde is profoundly unpopular – even among Democrats. That’s why Tim Kaine has flipped his position on taxpayer funding of abortion five times in the last month. Voters should not be fooled. We know how he would vote on this issue if it comes to a tie in the U.S. Senate. He will not stand up for the conscience rights of taxpayers. Kaine’s charade on abortion is getting old and he’s only been on the ticket for a few days.”

A new Marist poll released Monday found that a majority of Americans (62 percent) oppose taxpayer funding of abortion including 45 percent of those who say they are “pro-choice” and 44 percent of Democrats. According to Gallup, one-third of Democrats identify themselves as pro-life.

The call to repeal Hyde contradicts the position previously taken by several Democratic Senators, including Bob Casey, Joe Donnelly, Heidi Heitkamp, and Joe Manchin, who have all previously said they oppose forcing taxpayers to fund abortion.

Susan B. Anthony List and its Political Action Committees, the SBA List Candidate Fund and Women Speak Out PAC, spent $15.25 million in the 2014 election cycle to defeat pro-abortion incumbents and elect pro-life candidates to federal and statewide office. The SBA List is dedicated to pursuing policies and electing candidates who will reduce and ultimately end abortion. To that end, the SBA List emphasizes the education, promotion, mobilization, and election of pro-life women.  The SBA List is a network of more than 465,000 pro-life Americans nationwide.