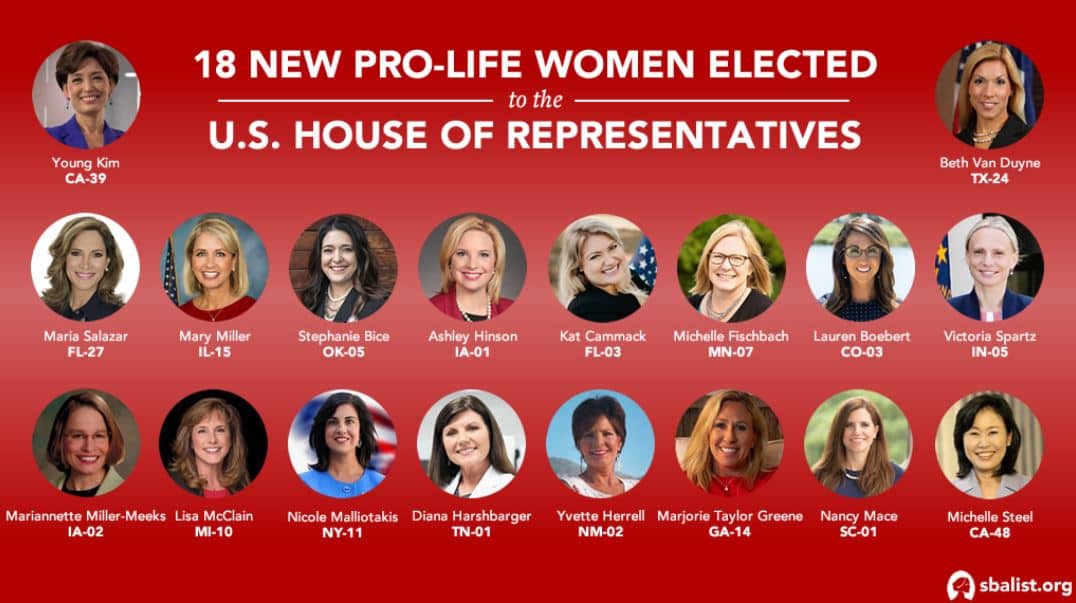 Of the 18 newly-elected women, ten have flipped seats formerly held by pro-abortion Democrats.

“A record 29 pro-life women will serve in the House of Representatives in the next Congress: continued proof that life is winning in America,” said SBA List President Marjorie Dannenfelser. “These pro-life champions will serve as a brick wall against the radical pro-abortion agenda of Speaker Pelosi and pro-abortion Democrats dead set on taking out even modest protections for pro-life Americans such as the Hyde Amendment and similar legacy riders.

“The exponential growth of pro-life women in the House is reflective of the fact that life has gone from being viewed as a political problem to a winning issue. These women have already done important work to expose the extremism of their radical pro-abortion opponents and we look forward to working alongside them to depend lifesaving law and policy in Congress.”

Earlier this month SBA List’s partner Women Speak Out PAC (WSO PAC) announced details of its independent expenditure campaign to elect pro-life Senators Kelly Loeffler and David Perdue in Georgia. The $4.1 million multi-channel effort will include voter mail, digital ads, voter calls and texts, and door-to-door canvassing. The group will contact one million voters ahead of election day including in-person visits to voters at their doors.

The groups’ Georgia efforts are an expansion of their overall $52 million campaign for the 2020 cycle. The biggest election effort in the organizations’ history reached more than eight million voters across 10 key battleground states: Arizona, Florida, Michigan, Montana, North Carolina, South Carolina, Iowa, Pennsylvania, Texas, and Wisconsin. Details of the campaign in each can be found in SBA List’s 2020 Election HQ.