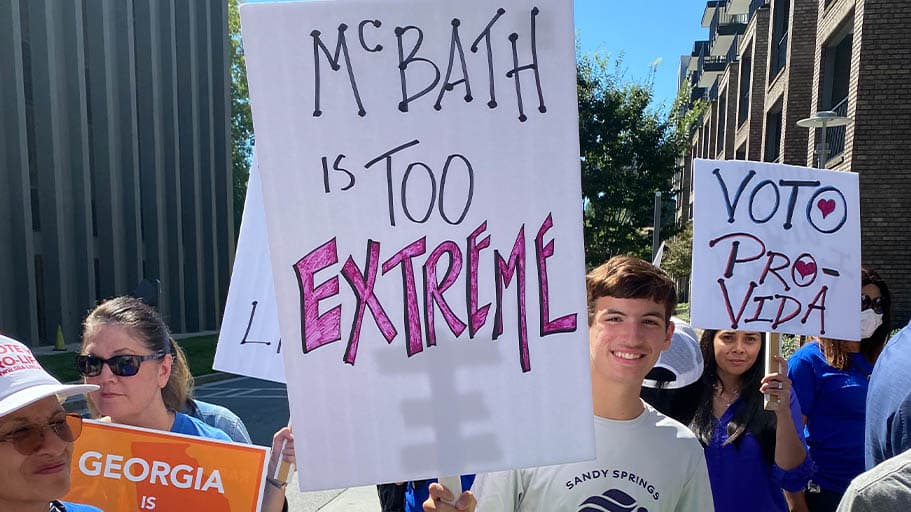 Washington, D.C. – U.S. Rep. Lucy McBath (D-GA) and other Democrats on the House Judiciary Committee this week rejected amendments to the reconciliation bill, offered by Rep. Mike Johnson (R-LA) and Rep. Michelle Fischbach (R-MN) respectively, to codify Hyde Amendment protections which prevent taxpayer funding of abortion and to protect unborn babies from abortion when they can feel pain.

This fall Congress will work to determine policy related to health care funding in appropriations bills and in the $3.5 trillion reconciliation bill. Pro-life groups are urging members of Congress to respect the will of the American people and adhere to the longstanding Hyde Amendment in both processes.

The national pro-life group Susan B. Anthony List, which held a press conference outside McBath’s Atlanta office last month, responded in a statement:

“The science is clear: unborn children are as human as you and me, and that includes their capacity to feel pain,” said SBA List President Marjorie Dannenfelser. “The United States is one of just seven countries in the world to allow painful late-term abortion on demand more than halfway through pregnancy, along with China and North Korea. Georgians, like the strong majority of Americans, reject abortion extremism and want to modernize our outdated, cruel abortion laws to protect both women and children – yet Congresswoman Lucy McBath sides with radical Biden-Pelosi Democrats who seek to impose abortion on demand, paid for by taxpayers, up to the moment of birth. McBath is far too extreme for Georgia and she must be held accountable to the voters.”

Since it was first enacted over four decades ago, the original Hyde Amendment alone has saved more than 2.4 million lives. Learn more at sbalist.org/hyde, or search the hashtag #hydesaveslives on Twitter.

SBA List has launched a six-figure campaign to expose the abortion extremism of the #Terrible20 vulnerable House and Senate members up for re-election in 2022, including McBath and U.S. Senator Raphael Warnock (D-GA), who refuse to the support the Hyde Amendment and similar policy riders. The campaign is an expansion of the group’s ongoing six-figure campaign to expose the extremism of Democrats on this issue and thus far has included digital ads, grassroots phone calls, and multi-state press tour during the August recess with a stop outside McBath’s district office in Atlanta.

Earlier this month, on the heels of the U.S. Supreme Court’s 5-4 decision allowing the Texas Heartbeat Act to remain in effect, House Speaker Nancy Pelosi announced plans to hold a vote on the so-called “Women’s Health Protection Act” following President Biden’s call for such action. This bill would expand abortion on demand by preventing enforcement of existing laws that protect unborn children at the federal and state level and blocking states from passing new pro-life laws.