Washington, D.C. – This morning SBA List president Marjorie Dannenfelser insisted that the national media report on previously unseen video obtained by David Daleiden and the Center for Medical Progress during the 2014 and 2015 National Abortion Federation conventions.

The shocking footage, released yesterday by Daleiden’ s attorneys, has been removed from YouTube and received little coverage from the national media.

Planned Parenthood employees describe, in brutal detail, late term abortions in which they acknowledge they rip unborn children from their mother’s wombs and tear the baby’s limbs off. 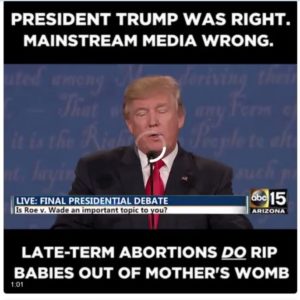 “The video completely vindicates President Donald Trump, who was ridiculed by many in the national media after he described the violent truth of late term and partial birth abortions during the third presidential debate last year,” said SBA List President Marjorie Dannenfelser.

“Those in the press turning a blind eye to this evidence are doing a profound disservice to their profession and the public who depend upon their professionalism. A civilized nation dares not look away from such inhumanity. This trading in human flesh and body parts is indefensible and must stop.”

“An eyeball just fell down into my lap, and that is gross!” [laughter from the crowd]
– Dr. Uta Landy, Founder of the Consortium of Abortion Providers (CAPS), Planned Parenthood Federation of America (PPFA)

“I’m like — Oh my God! I get it! When the skull is broken, that’s really sharp!”
– Talcott Camp, Deputy director of the ACLU’s Reproductive Health Freedom Project

“I might ask for a second set of forceps to hold the body at the cervix and pull off a leg or two, so it’s not PBA [partial-birth abortion].”
–  Dr. Ann Schutt-Aine, Director of Abortion Services for Planned Parenthood Gulf Coast

“I get a lot of oohs and ahhs from StemExpress. You know, they’re wanting livers…Last week I was in Sacramento, and she said, “I need four intact limbs.” And I said, you want what?”
– Dr. Leslie Drummond, abortionist at Planned Parenthood Mar Monte

Susan B. Anthony List and its partner super PAC, Women Speak Out spent more than $18 million in the 2016 election cycle, knocking on more than 1.1 million doors in battleground states to defeat Hillary Clinton and maintain a pro-life Senate. SBA List is dedicated to pursuing policies and electing candidates who will reduce and ultimately end abortion. To that end, the SBA List emphasizes the education, promotion, mobilization, and election of pro-life women.  The SBA List is a network of more than 465,000 pro-life Americans nationwide.