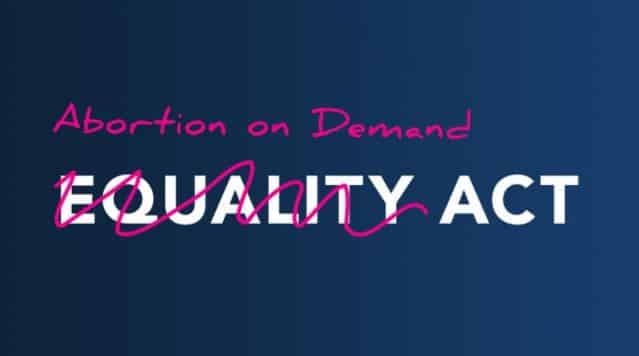 Washington, D.C. – Today Senate Democrats are expected to hold a hearing on the so-called “Equality Act,” bringing the legislation one step closer to a vote on the Senate floor. The House recently passed the legislation by a 224-206 margin. The bill seeks to redefine sex discrimination to include abortion under the category of pregnancy and childbirth and could force health care workers and pro-life health care entities to participate in abortions. The House version of this bill is H.R. 5; the Senate version is S. 393.

A coalition of 60+ national and state pro-life leaders sent a letter to senators in opposition to the bill. The letter reads, in part:

“If passed, this legislation would be a severe bludgeon to efforts to protect the unborn by establishing abortion rights under the auspices of addressing pregnancy-related conditions… the language in both the House and Senate versions of the bill lack critical abortion neutral language. Without such language, the bill will open a pandora’s box of abortion-related policy concerns, from taxpayer funding for abortions to abortion coverage mandates in health plans… We call on Senators to oppose this radical bill.”

“All pretense of ‘unity’ has been dropped,” said SBA List President Marjorie Dannenfelser. “Using misnomers such as the ‘Equality Act,’ or under the guise of COVID-19 relief, Democrats have sought nonstop to use their power to enshrine abortion on demand in our Constitution, expand taxpayer funded abortion without limits, and force pro-life health care professionals to participate in the taking of innocent unborn life.

“This radical agenda is deeply out of step with the majority of Americans. Susan B. Anthony List strongly opposes the deceptively-named Equality Act and will continue to work closely with our pro-life congressional allies to stop the ongoing assault on unborn children, as well as conscience rights.”

SBA List announced they will score votes on the legislation in a letter transmitted to U.S. senators last week.

In addition, the legislation adds any “establishment that provides health care” to the list of entities that must meet the public accommodation requirements of the Civil Rights Act and stipulates that any attempt to withhold such services constitutes discrimination, while explicitly blocking existing avenues for conscientious objection claims under federal law.

“Among other things this bill attacks the lives of countless unborn children, endangers Catholic and other pro-life health care providers, provides a basis for rescinding all state and federal limits on public funding of abortion, and treats religious believers as second-class citizens who must violate their fundamental moral convictions to serve the goals of the pro-abortion movement.”