Washington, D.C.  – Susan B. Anthony List President Marjorie Dannenfelser delivered the following remarks this afternoon at the National Press Club regarding Charlie Gard’s fight for life in the U.K. 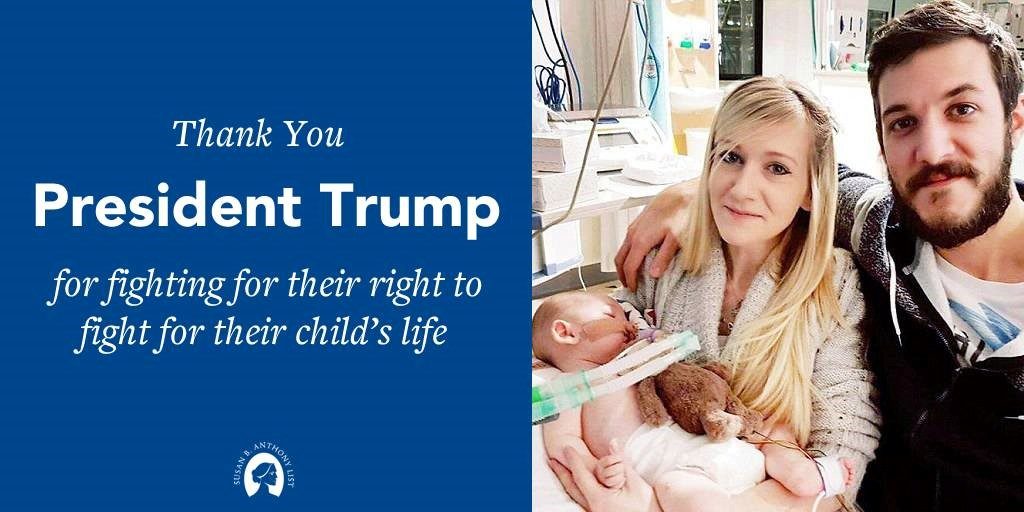 “President Trump is showing us the leadership of a president and the kindness and strength of a loving father in the case of baby Charlie Gard. He has offered to help Charlie and communicated in a tweet, “If we can help little #CharlieGard, as per our friends in the U.K. and the Pope, we would be delighted to do so.” Despite the European Court of Human Rights’ rejection of Charlie’s parents’ appeal to overturn the decision of British courts, hospitals in the U.S. and a Vatican hospital are offering to join their fight for his life. We insist that the British government intervene, respect the love and authority of his parents, and force the hospital to discharge little Charlie Gard.

“Whose ethics will prevail in the case of Charlie Gard? His parents fighting for his life? Or a hospital fighting against so-called ‘futile care?’ Medical authoritarian rule or parental rights and responsibility?

“Quoting Wesley J. Smith at First Things, ‘Whose baby is Charlie Gard, anyway’ That is the crucial question. And what follows, who has the right to determine his ‘care’? We put ‘care’ in quotes here because what the British government insists it must do cannot be called ‘care.’ Charlie’s parents want to rescue him. They understand that the odds are against him, but like all great parents, they are not only willing but are anxious to take those odds and fight for the life of their child. They want to truly care for their child in the way only parents can. They love him in a way an institution—a hospital and government—cannot. The hospital will not even allow Charlie’s parents to transfer him to others who do not see this parental love in action as an act of futility. This authoritarian ruling backed up by judges is a groundbreaking act. It cannot be called ‘care.’ It can be called dangerous utilitarianism. They believe that they, not Charlie’s parents, are better qualified to assess the value of his and any life. ‘Quality and relative futility’ of life are the ethics surrounding Charlie’s care.  The hospital and judges say Charlie must die, and that they will not discharge him. They insist he must die there, not at home. But whose baby is Charlie? It does not take a law degree, a degree in ethics, or even being a parent to see the obvious. Children are not the property of the state or any institution. They are not even ‘owned’ by parents because they are not commodities. Charlie is not owned by anyone but is loved into life by Chris and Connie Gard.

Susan B. Anthony List and its partner super PAC, Women Speak Out spent more than $18 million in the 2016 election cycle, knocking on more than 1.1 million doors in battleground states to defeat Hillary Clinton and maintain a pro-life Senate. SBA List is dedicated to pursuing policies and electing candidates who will reduce and ultimately end abortion. To that end, the SBA List emphasizes the education, promotion, mobilization, and election of pro-life women.  The SBA List is a network of more than 465,000 pro-life Americans nationwide.