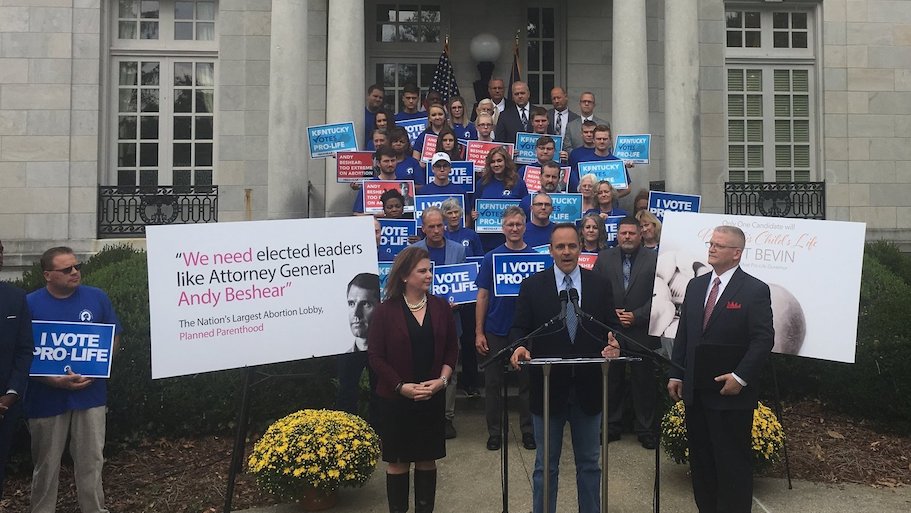 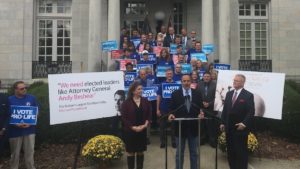 On a recent, cloudy fall afternoon, Kentucky Gov. Matt Bevin stood outside the governor’s mansion in Frankfort, flanked by a couple dozen activists in blue T-shirts, holding signs that read, “I Vote Pro-Life.”

“It took me a while to figure out why I keep seeing these blue T-shirts,” Bevin joked as he turned to the volunteers. “I wasn’t sure who you were, but I’m just grateful to you.”

These activists have been door-knocking across Kentucky on Bevin’s behalf, to reach 200,000 voters before the election on Nov. 5.

The Susan B. Anthony List, a national anti-abortion rights group is organizing the effort. The organization has worked to elect conservative U.S. senators and helped push through the confirmation of President Trump’s Supreme Court nominees, Neil Gorsuch and Brett Kavanaugh.

SBA List President Marjorie Dannenfelser was at Bevin’s event to endorse the governor and other Republicans running for statewide office. She and anti-abortion rights activists like her say they are supporting politicians who will lead Kentucky and other states “into this next chapter of the pro-life movement, which is the most important chapter of the pro-life movement since Roe vs. Wade,” she said.