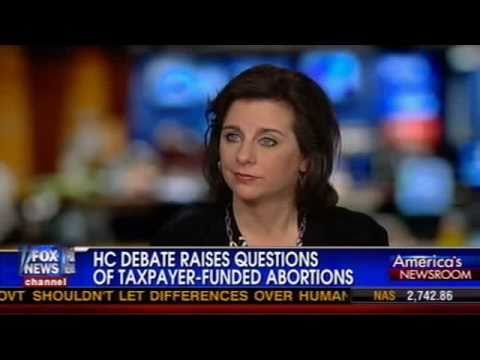 This week, the House took up health care reform law repeal.  Before the voteon Wednesday, Fox News correspondent Shannon Bream interviewed Susan B. Anthony List President Marjorie Dannenfelser on the Fox News Special Report to ask about abortion funding in the health care reform law.  Marjorie said of the prospects of repealing abortion funding in the law, “there is a strong wind behind prohibiting taxpayer funding of abortion… and these are very strongly pro-life Members of Congress who would do more if they had the opportunity.”  The interview also ran online.  After the vote, several non-political outlets like the Christian Post also noted the momentum building behind repealing the law in its entirety.  The day after the vote, pro-abortion players on the Hill were forced to respond to the overwhelming support for repealing abortion in the health care bill, with Health & Human Services Secretary Kathleen Sebelius telling The Hill, “There is no taxpayer funding for abortion.”

Throughout the week, some Christian outlets continued applauding the election of Reince Priebus to RNC Chairman while others noted the significance of the approaching 38th anniversary of Roe v. Wade, the U.S. Supreme Court decision legalizing abortion in America in light of the recent re-emergence of the abortion issue on Capitol Hill.  Still others began speculating on a pending announcement from Indiana Rep. Mike Pence about whether he planned to run for U.S. Senate or for President in 2012.

The Hill: health Secretary Sebelius: ‘There is no taxpayer funding for abortion’
Date: Jan 21, 2011        By: Julian Pecquet
http://thehill.com/blogs/healthwatch/other/139433-health-secretary-there-is-no-taxpayer-funding-for-abortion