The Times covers the SBA List’s strategy to fight the so-called “War on Women.” 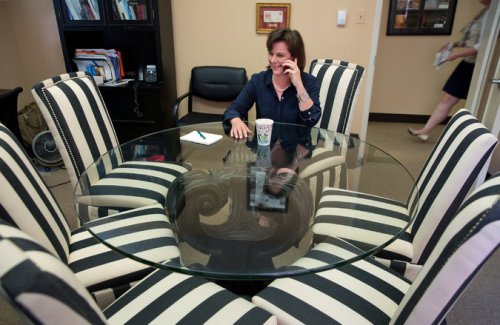 Marjorie Dannenfelser, the president of the Susan B. Anthony List, the anti-abortion group that hosts the boot camps, sitting in her office in Washington, D.C.  Credit Stephen Crowley/The New York Times

It was not on the public schedule for the Republican National Committee’s spring meeting at the stately Peabody Hotel in downtown Memphis. But inside a conference room, a group of conservative women held a boot camp to strengthen an unlikely set of skills: how to talk about abortion.

They have conducted a half-dozen of these sessions around the country this year, from Richmond, Va., to Madison, Wis. Coaches point video cameras at the participants and ask them to talk about why they believe abortion is wrong.

They review the video, and critiques are rendered. “Rape is a four-letter word,” one of the consultants often advises. “Purge it from your lexicon.”

Another tip: Keep remarks as short as possible. “Two sentences is really the goal,” said Marjorie Dannenfelser, the president of the Susan B. Anthony List, the anti-abortion group that hosts the boot camps. “Then stop talking.”

The New York Times featured our powerful political and legislative strategies because they have proven effective in saving the lives of unborn babies and their mothers. Please make the most generous donation you can right now – every penny goes to our efforts to elect strong pro-life leaders who will defend the unborn at both the state and national levels!