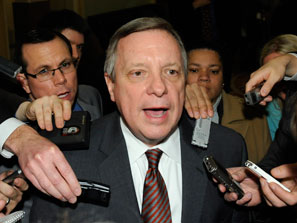 According to Sen. Dick Durbin (D-Ill.), the District of Columbia has one of the highest abortion rates because it is disproportionately black.

This regrettable statement was made last week during a Senate Appropriations Committee markup on the bill that funds DC.

Senate Democrats have pushed for taxpayer funding of abortions in the District of Columbia, even though a full 41% of all pregnancies in DC already end in abortion, twice the national average.

Sen. Sam Brownback (R-Kan.) argued in committee that abortion could hardly be called “rare” if nearly half of DC pregnancies ended in abortion. Durbin’s revealing reply is as follows (listen):

Durbin: In terms of safe, legal and rare, to the Senator from Kansas, I will tell you two things. First, it is a fact that a disproportionately large number of African Americans seek abortion in America, not just in the District of Columbia, but all across the nation.
Brownback: 41 percent?

Durbin: No, but it’s also a fact that a disproportionately large number of African Americans live in the District of Columbia.

Durbin: I’m telling you, look at the numbers.

Durbin: Look at the numbers, and you will find this to be true.

Brownback: This — this is not high enough?

Durbin is not only untroubled by such a high abortion rate, but would like to see the rate grow even higher, as will surely happen with government subsidy of abortion.  Frightening, but not unexpected, considering the recent offensive remarks of Justice Ginsburg.