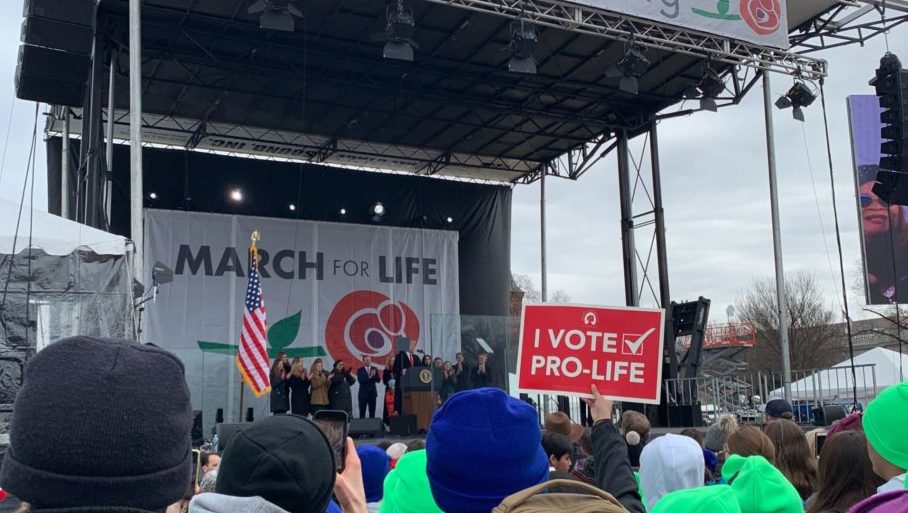 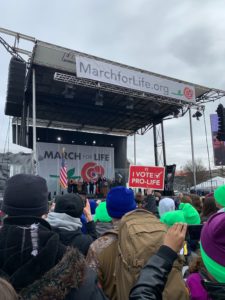 The Aura of Victory: An Amazing March for Life
by Marjorie Dannenfelser and Chuck Donovan

Jeanne Mancini, president of the March for Life and emcee of its massive annual gathering on the National Mall in Washington, D.C., describes it perfectly. Speaking to a crowd of a quarter million or more, a good half of them men and women under the age of 20, Jeanne hailed the attendees as the largest pro-life event in the world.

Let those words sink in.  Mass demonstrations occur around the planet every year, some of them very impressive.  People gather to highlight climate change, protest tax hikes on fuel or other commodities, or to demand a change in government.

But all of these events pale before the March every January in Washington, D.C to challenge the Roe v. Wade decision that eviscerated the right to life of unborn children from conception to birth, and now – starkly and sadly – beyond.  Year in and year out – for 47 years in a row – this peaceful and awe-inspiring event – come snow, sleet, or an occasional early spring – has endured, a march for people seeking nothing for themselves but rather a cradle of protection for the most vulnerable among us.

For decades, the March for Life was helmed by the redoubtable Nellie Gray, whose leadership and character blunted the barbs of the pundit class and endured their fading attempts to overlook the millions she shepherded onto the National Mall over the decades.  She came to be known by her first name – just “Nellie” – a rare tribute in our national politics, befitting the role she played in a thoroughly American drama.

Now it may have become “Jeanne’s” hour.

You see, in 2020, there was fresh realization, dawning on a jaded country, that the tide of resistance to the brutal command of the abortion cases no longer flows in a radical direction.  That rarest of things in politics and policy anywhere, a seemingly impregnable fiat written from above by the highest court in the land is being resisted and reversed by the people.

Our history has taught us how difficult a thing this is to accomplish, no matter how grave the injustice.  In 1896 the United States Supreme Court, discarding the ideals inscribed in our Constitution at the price of a Civil War, upheld racial segregation in Plessy v. Ferguson.  Enormity that it was, this ruling lasted 58 years until it was overturned by that same court in Brown v. Board of Education.

Today Roe v. Wade has lasted nearly five decades as “the law of the land.” While it took a decision of the Supreme Court to end a manifest injustice, contrary to the nation’s deepest values, segregation was ultimately ended by the people themselves, embodied by Dr. Martin Luther King and the civil rights movement, who marched, prayed, sang, and called on the nation to raise the banner of freedom – to recognize that every person is “an heir of liberty,” that “noble legacy” we receive by virtue of merely being human.

Thus, in 2020, we are sensing anew that the invention of an abortion right violates the deepest principle that every one of us is made in the image and likeness of God.  How often have marchers for Life heard the catcalls of opponents and some in the press, who argued that these annual displays on the Mall would not last?  That we would tire, suffer division, wither away, and collapse.

How wrong they are!  This is where Jeanne Mancini and her team have performed an American miracle.  They are too humble to say it, and knowing her, even to think it, but they have done something that almost never happens in the annals of our country.  They have witnessed without fail.  They have helped us reach the edge of the uplands we seek – a life-affirming, woman-affirming, family-affirming culture and polity.

This year’s March was once again warm and hopeful.  The spirit of the March converged with and conveyed our fondest dreams.  Yes, there is work to be done, laws to be passed, pregnancy centers to be opened, mantles of responsibility to be taken up, health care to be delivered to women and babies in need.  We are summoned once more to heed the “better angels of our nature.” Above it all, there is thanks to Almighty God, and praise for all who have labored, wept, and worked to see such a day.

Truly this was a March to remember – an ambience of love and service agleam with the aura of victory.