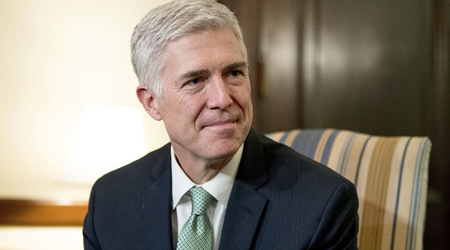 “Many issues motivated Americans to vote in last year’s presidential election, but one stands out: the future composition of the Supreme Court. More than one-fifth of all voters, according to exit polls, said the Supreme Court was their number one issue. Those voters chose Donald Trump over Hillary Clinton by a margin of 57 to 40 percent nationally, thereby ensuring his victory and giving him a mandate to appoint pro-life justices to the court in the mold of late Justice Antonin Scalia.

President Trump had those voters in mind when he nominated Judge Neil Gorsuch, a brilliant jurist and a worthy successor to Scalia, to the Supreme Court. In his speech announcing the nomination, the president said, ‘When Justice Scalia passed away suddenly last February, I made a promise to the American people: If I were elected president, I would find the very best judge in the country for the Supreme Court. I promised to select someone who respects our laws and is representative of our Constitution and who loves our Constitution and someone who will interpret them as written … Millions of voters said this was the single most important issue to them when they voted for me for president. I am a man of my word.'”