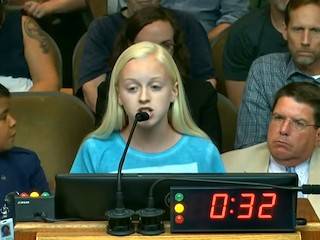 Addison Woosley is fearless when it comes to standing up for the unborn. She gave a remarkable speech in her hometown of Raleigh, NC on the floor of the city council, comparing abortion to slavery. Upon giving her speech, 13 year-old Addison received boos of disapproval from the crowd – but that didn’t stop her from raising her voice even louder to ask that abortion be made illegal in Raleigh. She said in her speech, “These babies are alive. They feel being killed. It hurts them and there is nothing they can do about it. There is no way around it – abortion is murder.” Addison’s courage in naming abortion as the greatest injustice of our time did not go unnoticed, and we’re honored to work with this wonderful pro-life advocate. Watch her Pro-life Weekly interview below!