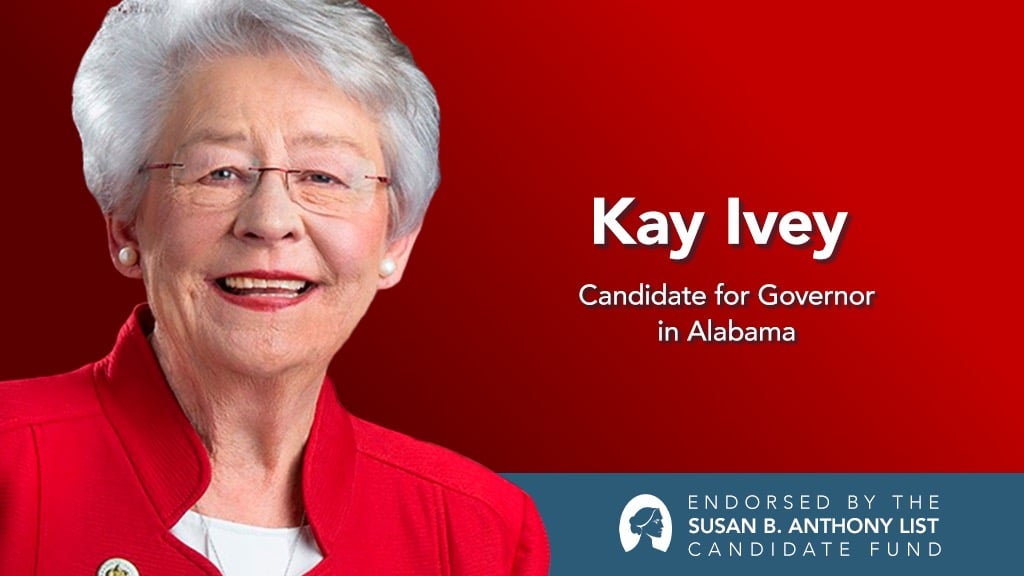 “Governor Kay Ivey is a trailblazer and a champion for unborn children and mothers in the deeply pro-life state of Alabama,” said Hon. Marilyn Musgrave, SBA List’s vice president of government affairs. “Our support for Kay goes back more than a decade, and she has always been outspoken in defense of life. As governor, she has boldly challenged the national status quo of abortion on demand up to birth, signing some of the nation’s strongest legislation protecting unborn children throughout pregnancy. Her authentic pro-woman leadership powerfully counters the lies of the abortion lobby and their extremist political allies. We are proud to endorse her for re-election and urge all Alabamians to vote for her on May 24.”

“I’m honored to accept this endorsement today from such a wonderful organization. I signed the strongest pro-life law in the nation because, as governor, there is nothing more important than protecting our innocent babies,” Ivey said. “We defend them because they can’t defend themselves. And every life, no matter how small, is a precious gift from God. In Alabama, we will never back down, and we will never stop fighting to protect the unborn.”

Ivey has served as governor since 2017. She is the second woman and the first Republican woman to hold this title. Previously she served as lieutenant governor and treasurer. A native of Alabama and graduate of Auburn University, she was a teacher before she worked in both the Alabama House of Representatives and the state Development Office. Ivey is a member of First Baptist Church in Montgomery.

Ivey is a founding member of SBA List’s National Pro-Life Women’s Caucus. As governor, she signed legislation that protects unborn children when their heartbeat can be detected and born-alive protections for babies who survive abortions. She was one of 12 pro-life governors to sign a brief in Dobbs v. Jackson Women’s Health Organization calling on the U.S. Supreme Court to overturn Roe v. Wade and restore the right of the people and their elected representatives to protect unborn children in the law.